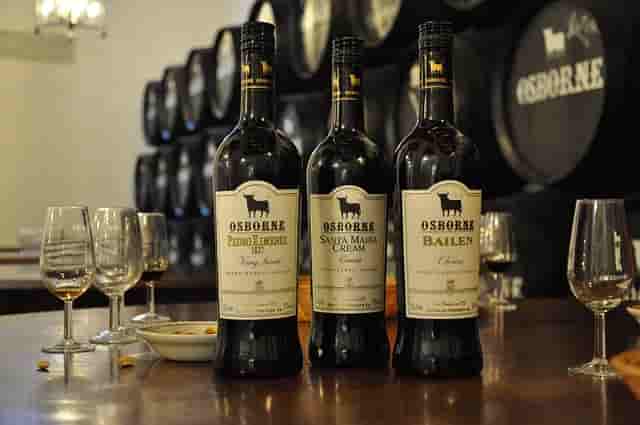 Fortified wines are wines whose alcohol strength is increased with the addition of grape spirit. The spirit is added either during or after fermentation. If it is added during the fermentation, the yeasts are killed and fermentation comes to a complete halt, thus, resulting in a sweet fortified wine.

If the spirit is added at the end of the fermentation when all sugar is converted, the fortified wine becomes dry

The addition of grape spirit to the wine was initially done to preserve the quality and stabilize the wine during the long sea voyages. This process gave birth to fortified wines of many styles. Sherry comes from the “Jerez” district in the south of Spain and it includes the town of Sanlucar de Barrameda. Jerez de la Frontera, and Puerto de Santa Maria. The word “sherry” is an anglicization, Jerez. Sherry wine is a basically dry white wine with 10-14 percent alcohol. Grape brandy is added to the wine bringing the alcohol strength to 15 percent. 1. Wood ports: These ports are matured in oak cask and ready to drink after they have been bottled.

2. Vintage port (bottle port): These wines mature in the bottle after keeping them in oak casks for a few years.

Madeira is a Portuguese fortified wine that comes from the island of Madeira in the Atlantic Ocean. During the eighteen century, when the wines were shipped to Britain from the colonies, the wines were heated during the sea voyage which developed a mellow-burned flavor and improved the quality. This gave birth to Madeira wine. Madeira is named after the grapes used in the production. They are given in the ascending order of sweetness in the following:

This fortified wine comes from North West Sicily, taking its name from the name of a town in that area. The local grapes Grillo, Cataratto, and Inzolira are used in the preparation. Marsala wine is made from a blend of white wine, brandy, and heated must, which is then matured in the solera system.

Marsala fine: It varies in style from dry to sweet and needs a minimum period of four months of aging.

Marsala Superiore: The style ranges from dry to sweet and must be a minimum of two years old.

Marsala Speciale: It is marsala with flavor, such as coffee, almonds, fruits,

Marsala Vergine: It is driest of all marsalas and is normally offered as aperitif

Vergine Stravecchio or Vergine Riserva: It is aged for a minimum period of 10 years.

Malaga is a sweet fortified wine that comes from Malaga on the Mediterranean coast of Spain. The main wine grape used in its production is Pedro Ximenez. It is produced from the grapes dried on the straw mats in the sun. It is then blended with concentrated grape juice after fermentation and is then fortified. Service of fortified wine is similar to the other wine, they are consumed with meals, normally being served with aperitifs or desserts. You may also read our guide on the service of wine step-by-step.

While some are best chilled, it’s recommended to serve others at room temperature. This is also going to depend on your personal preference as well.

Fortified wines are also used in cocktails, and in making different sauces.
Recommended reading: What are the different types of wine