Cheese is one of the by-products of milk. It is prepared from either cream of milk or cream and milk together.

Different degrees of heat and pressure are produced in different types of cheese. It is made from cows, goats, sheep’s buffalo milk

Types of cheese are classified on the basis of many factors such as the method of production, texture, fat content, softness, animal milk, region, or country of origin.

In this guide, we will explain 27 different types of cheese, their origin, their uses 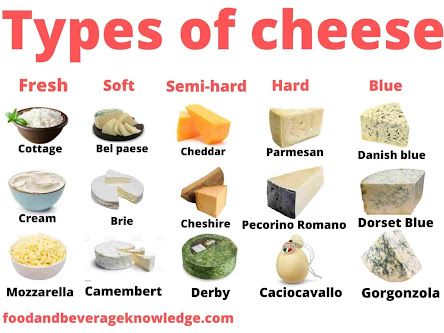 The ways to classify cheese

Please feel free to jump into any section
{tocify} $title={Table of Contents}
$ads={1}
Here is the list of the most popular types of cheese and their origin, uses

This is a fresh cheese, mild flavor, and creamy. Cottage cheese is made by acidifying milk in which curds are separated from the whey, It has a low-fat percentage and high protein.
Origin of cheese:  U.S.A
Milk Type: Cow milk, skimmed milk
Uses of cottage cheese: It can be used with a variety of foods such as fruit, toast, granola, in salads as a dip.

Cream cheese is a soft mild-flavored fresh cheese. It has a high-fat percentage. Cream cheese is not naturally matured and usually consumed fresh, made from cream and milk.
Origin of cheese: U.S.A
Uses of cream cheese: Cream cheese is often spread on bread, bagels, crackers, and used in salads. It can be mixed with other ingredients, such as yogurt or pepper jelly, to make spreads.
$ads={2}

Mozzarella is a fresh Italian cheese made from buffalo milk but today also made from cow’s milk. Fresh mozzarella is usually white in color but when seasoned it turns to a light yellow depending on the animal’s diet.
Origin of cheese: Italy
Milk type: Buffalo milk, cow,s milk
Uses of mozzarella cheese:  Mozzarella is used in different types of pizza and pasta dishes or served with sliced tomatoes and basil in Caprese salad.

Ricotta is a fresh Italian cheese made from cows
Origin of ricotta cheese:  Italy
Milk type: cow’s milk and sheep milk
Uses of ricotta cheese: It is mostly used in Italian desserts such as cheesecake, cannoli. and in savory dishes.

Bel paese is a soft creamy Italian cheese, bel paese means beautiful country, in Italian, which is a fitting name for this beautiful cheese. It takes six to eight weeks to mature the cheese, the color is pale yellow.
It has a mild, buttery flavor for which it has been popularly eaten with fruity wines.
Origin of cheese: Italy

Uses of bel paese cheese: It is used in many desserts, and melts easily for use on pizzas or in casseroles. It is often used as a substitute for mozzarella cheese.

Brie is a soft Italian cheese made from cow’s milk, it is named after the Brie region of France. Brie cheese has a high-fat percentage.
Origin of brie cheese: Italy
Milk Type: Cow,s milk

Uses: lidded ceramic dish, and topped with nuts or fruit, or both.

Camembert is a soft cheese and was first made in the late 18th century at Camembert, Normandy, in northwest France. It takes at least 3 weeks to mature, and the texture is soft-ripened.

Feta is a salty and tangy flavored Greek brined curd white soft cheese made from goat’s and sheep’s milk. It is low in fat and calories than aged cheeses like Parmigiano-Reggiano or Cheddar.

Use of feta cheese: It is used in salads such as Greek salad, and in pastries. It is often served with olive oil or olives and sprinkled with aromatic herbs such as oregano.

Neufchâtel is a French soft cheese, the texture is slightly crumbly, mold-ripened cheese. It is named after Neufchâtel-en-Bray the region of Normandy in France. It takes 8 to 10 weeks to mature.
Origin of cheese: France
Type of milk: Cow’s milk

Cheddar is the most popular semi-hard cheese comes in many variations. made from cow,s milk aging time is 3 to 24 months depending on the variety. It is named after the cheddar village in somerset in England.

Cheshire is a crumbly slightly salty dense semi-hard cheese, named after the English county of Cheshire.  It takes 4 to 8 weeks to mature the cheese. Cheshire is white and red in color.

Derby is a mild, semi-firm British cow’s milk cheese, it is a semi-hard cheese with a mellow texture and a buttery flavor. It has a pale, golden orange interior with a natural or waxed rind and ripens between one and six months.

Edam is a semi-hard cheese that originated in Netherland. It is named after the town of Edam in the province of North Holland. It has a slightly salty and nutty flavor. As the cheese ages, its flavor sharpen and became firmer.

Use of Edam cheese:  It is eaten with fruit and cracker-like pears apples and some wine such as Riesling, sparkling wine, chardonnay.

Emmenthal is a yellow swiss semi-hard cheese, that originated from the Emmental area of Switzerland. It has some holes in it which occur during production. It is classified as a swiss type or alpine cheese. There are three types of bacteria that are needed to produce Emmenthal, Streptococcus thermophilus, Lactobacillus helveticus, and Propionibacterium freudenreich.

Uses of Emmenthal cheese: It is usually consumed cold, as the chunk.

Gloucester is an English semi-hard cheese, it is traditionally made from milk of Gloucester cattle. There are two types of Gloucester cheese double and single, but Single Gloucester is more crumbly, lighter in texture, and lower in fat than double, double is allowed to age longer period of time, it has a stronger savory flavor.

Gouda is a sweet creamy semi-hard cheese, made from cow’s milk, yellow in color. Originated from the Netherlands, it has a buttery texture and red rind. It goes well with strong beer and port wine.

Gruyere is a semi-hard yellow Swiss cheese, it is named after the town Gruyere. It has small pea size holes and a smooth relatively hard texture. Gruyere cheese has a grainy texture, and salty flavor, it comes in many varieties depending on the age.

Use of gruyere cheese: It is a good melting cheese, mostly used for baking. Used in some dishes such as French onion soup, French toast, and cheese sandwiches, and often uses with salad, and pasta.

Port Salut is a semi-hard French cheese with a creamy texture, it has a mellow, sweet, and savory flavor. Originated from the region Loir valley of France, made from pasteurized cow’s milk.

Uses:  It is usually served with fruits and crackers, as it is a good melting cheese used in various sauces, sandwiches, and pizza.

Parmesan is the most popular hard Italian cheese, made from cow’s milk. It has a fruity and nutty flavor with a crumbly texture. Parmesan is wildly  known as grated cheese use over dishes like soup, pizza, pasta,

Use of parmesan cheese: Commonly grated over Pizzas, and pasta, and can be eaten on its own.

Pecorino Romano is a hard Italian cheese with a very crumbly texture. There are regional types of Pecorino Romano like Pecorino Toscano from Tuscany and Pecorino Sardo from Sardinia. It is aged at least 5 months.

Caciocavallo is a hard type of stretched-curd cheese. originated from It is Southern Italy, particularly in the Apennine Mountains and in the Gargano peninsula. made from sheep or cow’s milk.

It is a strong semi-hard blue-veined cheese, made from cow’s milk. Danish blue was invented early in the 20th century by a Danish cheesemaker named Marius Boe.

It is an English blue cheese with a crumbly hard texture, the aging time is 6 weeks.

It is an  Italian veined blue cheese with a crumbly texture and salty taste. Made from unskimmed cow’s milk.

Use of gorgonzola cheese: It is often used in salad as a dressing, and sometimes use as a topping for steak, and goes well with port, dessert wine.

Roquefort is a French blue cheese, made from sheep milk with a crumbly texture and tangy taste. Originated from southern France. Maturing take place in the cave

It is an English semi-hard blue cheese with a crumbly texture. It is named after the village of stilton.

Use of stilton cheese:  It is commonly served in crackers, and goes well with port, cherry, or dessert wine.

Bleu de Bresse is a French blue wine that originated from the Bresse region of France. It has a soft and mild flavor and is white in color, has the aroma of mushroom.

Cheese should be stored in a cool, dark place with good air circulation or in a refrigerator. It should be wrapped in either greaseproof paper or aluminum foil to prevent drying out from taking place, store away from the food or it will absorb the flavor of the food.
Recommended reading: Types of soup with examples

27 types of most popular cheese PDF