Soup is a liquid food consisting of meat, seafood, vegetables, cereals, and poultry as a base. It plays an important role on the menu and is worked as an appetizer as it stimulates the appetite for the havier food to follow. After the appetizer, it is the second course on the french classical menu

Soups are broadly
classified into two types- thick and thin, they are further classified as passed or unpassed, and puree, cream or chowder etc. This is done based on the texture of the soups

However, there are two more categories cold soup and international soup, to better understand the classification of soup look at the below infographic. 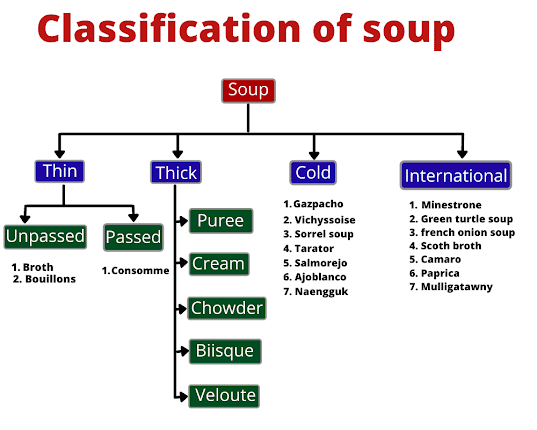 Get the classification of soup pdf

Most of the thin soups are cristal clear, flavoured, nutritious liquid, and it is prepared without a thickening agent. Food items should be floating in soups. It can be classified into passed and unpassed which is further classified as Consomme, Bouillon, broth see below

It is a strongly flavoured clarified soup. It,s flavour is increased by the addition of meat, poultry, herbs, and seasonings. It is prepared with minced meat, diced carrot, turnips, onions, celery, egg white, seasonings.

Cold beef, mutton, or chicken stock is used and mixed with all ingredients. This mixture is placed on heat and allowed to boil and then simmered.

Consomme can be served hot or cold, the colour of the consomme is known as AMBER

Note: The beef stock is good for consomme preparation as it has full of flavour and body.

Read more about consomme in Wikipedia

It is a clear soup strong meat flavoured, vegetables, meat, seafood should be floating in the soup

Broths are similar to bouillon but the liquid is a little cloudy and contains all types of vegetables, meat, chicken. This should be cut into regular shapes and floating in the soup. In this soup we use either barley or oat, it gives the cloudiness of the soup

As the name suggests They are thick soups and thickened with a thickening agent, such as a roux, or by puréeing one or more of their ingredients to provide a heavier consistency.
Some examples of thick soups are

Starchy vegetables such as potatoes, pumpkin etc, and cereals are used to make puree soup. When pureeing this ingredient in soup, usually act as self thickness so there is no need for any extra thickening agent

Note: The garnish of puree soup is crotons.

They are prepared with a puree of vegetables, poultry, fish or meat and thickened with bechamel sauce or give a cream finish

Veloute soups are similar to other veloute sauces, but here veloute is less concentrated and thin soups. Veloute is made by preparing roux, adding stock and the puree of vegetables, meat, poultry and fish.

Hot milk is blended in soup to produce a smoothness of the soup. Finished the soup by using liaison (cream & egg yolks), as it enhances the taste and texture.

It is made of any shellfish puree, thickened with rice or cream and it is a slightly thick soup. The small particles of cooked shellfish should be floating in the soup. A small amount of wine is added for flavour and colour.

It is originated from America. They are thick heavy soups. thickened with potato. The base of the soup is either milk or tomato. Chowder consists of potatoes, onion, pieces of bacon, various seasonings and seafood

Cold soups are those which include natural gelatin or adding gelatin powder, or those that are thickened with starch or puree.
Cold soups are served cold but not chilled because chilling can dull the flavours and aroma of the soup. It can be thick or thin and passed or unpassed, cold soups do not form separate classification.
Many soups that are prepared to be a hot soup can be changed into a cold soup by simply chilling them and making minor alterations to the structure and flavour.
Cold soups are very popular during summer and are often term as summer delight. it is served in a chilled cup or bowl. Cold consommé madrilène is a popular cold soup. Let us see some examples of popular cold soup.
Examples of cold soup:

These soups represent the region of origin, like the Scotch broth from Scotland and French onion soup from France.
They can be thick or thin and hot and cold, do not form any separate classification. These soups are basically having a great tradition and that’s why they are known by their country.
Some of the international soups and their origin.

Get the classification of soup PDF file below