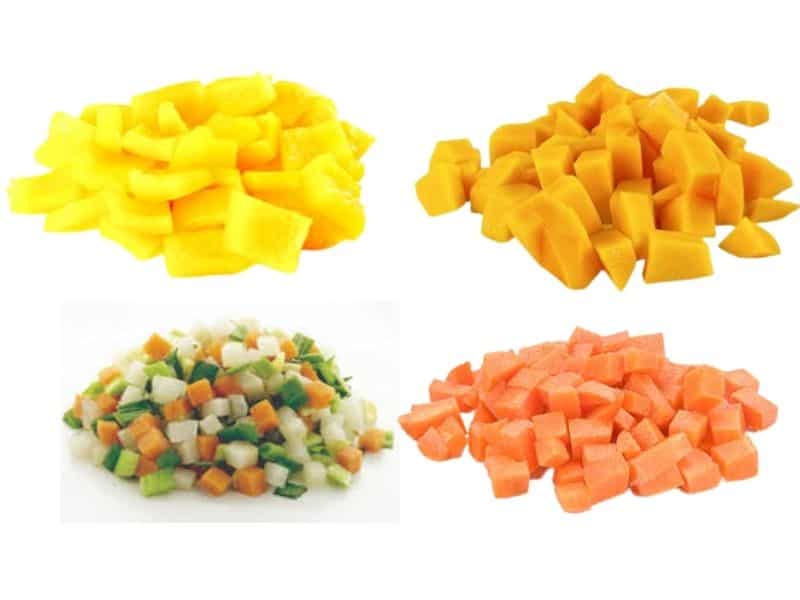 Brunoise is a culinary knife cut in which food items are first julienned and then turned a quarter turn and then diced. producing cubes of about 3 millimeters (1⁄8 in) or less on each side. These cuts of vegetable technique are used for some vegetables such as carrots, celery, leeks, bell peppers, and hard root vegetables like beets and turnips. Brunoise is used in many dishes as a garnish, it is often used to garnish consomme. Brunoise is also used as the base of some soup or sauce, and to sprinkle on top of some dishes as an aromatic garnish.
Brunoise style cut is add color and texture to a dish as it produces small sizes vegetables. The small cubes produce by brunoise cut help the flavor and aroma to more easily transfer to the cooking liquid.

How to cut brunoise style

1. Place the vegetables on a chopping board or countertop for cutting.
2. Frist slice the vegetable lengthways into rectangles, about 3 millimeters (⅛ inches) in width like julienned cutting.
3. lice the strips lengthways into thinner strips, about  3 millimeters (⅛ inches) in width now you will have julienne cut
4. Now turn your julienned strips into brunoise dice, gather the strips together, turn them at a 90-degree angle, and chop them down into 3mm cubes.