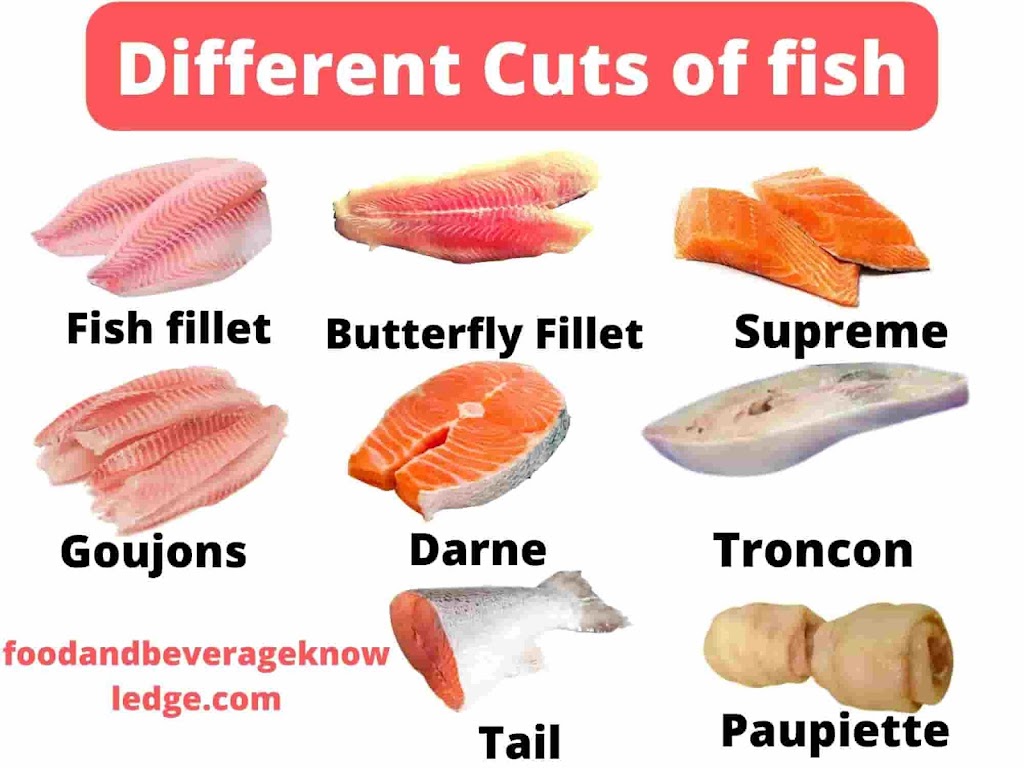 Fish come in many different sorts of shapes and sizes. It is very important to understand what part of a fish you should be used in different recipes or even which cut to pick up on your next grocery trip.

There are quite a few different ways to cut fish like cuts of vegetables, In this guide, we will explain the 10 different cuts of fish.
{tocify} $title={Table of Contents} De boned/boneless long flat pieces of fish without the skin (a flatfish gives four fillets), The fillet contains most of the edible portions of a fish. Fillets of larger fish can be cut further into portions.

Fillets are extremely versatile cuts that can be used in seasoned, marinated, baked, fried, and sautéed, and depending on the species, can be found skin-on and skin-off.

Fish fillet is laid flat on the table stuffing is spread on it, then it is rolled up, and tied with a string to keep the shape. A fillet is usually rolled and then stuffed with vegetables or fruits.

Paupiette may also refer to a classic French fish dish whereby a thin slice of fish (tuna, sole, whiting, or even anchovy) is stuffed, rolled, and secured with string before cooking in a stock.

Large fish fillet cut on a stand way. A Supreme cut is a slice of fish cut from a fillet at a slant and is considered the best cut of a fish. A supreme is a boneless cut from a fillet or lion which is cut either as a block cut or bais cut.

Goujons is a strips of fish fillet, approx 8 cm long by 1 cm. Goujons cut is from the fillets of small fish such as sole or plaice. This type of cut is basically used for garnishing.

These are smaller cuts and are mainly used as a garnish. It can be cramped and deep-fried.

7. Darne (Steak of round fish)

A piece of fish cut across and through the bone of a large whole round fish such as cod, or salmon (2-3 cm thick). Darne cuts are skinned and scaled or just scaled such as salmon steaks usually retain the skin.

It is a thick piece of fish, approx 4-5 cm. It is cut on the bone from a flatfish like a turbot. Troncon cut of fish is known as a fish cutlet or fish steak with bone.

The tail cut is the backend of a large fish closest to the tail and is normally cut and sold separately. It is very flavorful and best seasoned and roasted.