All the cooking techniques come under these three cooking methods, let us look at the infographic below to better understand. 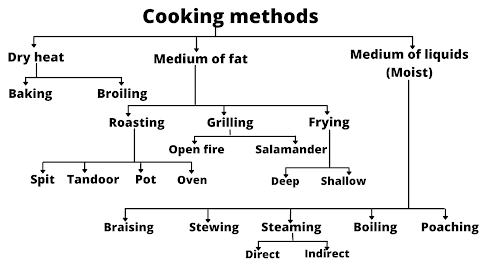 {tocify} $title={Table of Contents}
$ads={1}
Dry heat cooking method
In this cooking method foods are cooked without the presence of water, fat, or oil, it only relies on the circulation of hot air 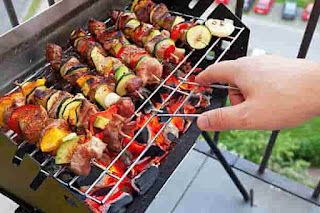 It is cooking by direct heat, it could be done by the source of heat above or below. It is dry cooking and can be done on an iron bar or pan, where the food is cooked uncovered. The pan or bar is oiled slightly to prevent sticking. 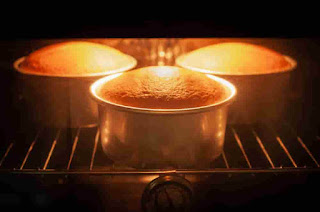 Baking is a method of cooking food by the action of dry heat in an oven. The degree of dryness of heat may be modified by the amount of steam produced from the item baked.

Medium of fat or oil

This cooking method is done with different types of fat or oil. 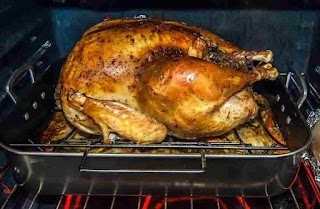 The term roasting was originally applied to the cooking of large pieces of meat on an open fire.

There are four types of roasting methods are there

It is done in a covered pot or pan, only good quality meats, small joints, and birds are used. The meat is tied with foil to retain the shape, it is placed in the pot and skewers, place at the bottom to prevent the meat from sticking to the pan. Fat should cover the bottom of the pan, cover the pot with a lid and cook on slow fire.

Oven roasting is done in a roasting tray in an oven with the aid of fat. First-class meat, poultry, and vegetables are used. It is put in hot fat, and all sides are browned to seal the juices. After 15 minutes aromatic vegetables should be added for flavoring.

This cooking technique is done in a clay oven. The heat comes below to above, the fire should be either coal, charcoal, or gas. We can prepare vegetables, fish, meat, poultry, Indian bread with this technique. 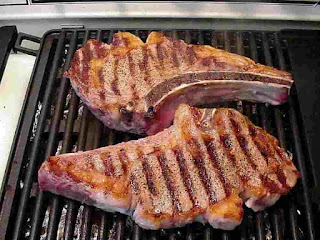 Grilling is a cooking method where the food is placed on a griller bar on heat which could be from below or above.

The source of heat may be charcoal, gas, or electricity.

We can also grill the food on a hot plate with a high flame, The plate is known as a griddle,  usually, small items are grilled on a griddle. 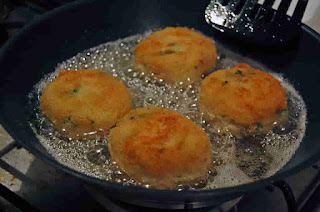 Food is fried when it is placed or immersed in oil or fat at high temperature, used to brown the surface at least. There are mainly two types of frying methods.

Deep frying is a cooking method in which food is submerged in hot fat, traditionally lard but today most commonly oil, as opposed to the shallow oil used in.

Shallow frying is a hot oil-based cooking technique. It is typically used to prepare portion-sized cuts of meat, fish, potatoes, and patties such as fritters.

Note: Sauteing comes under shallow frying, the term comes from the French word. 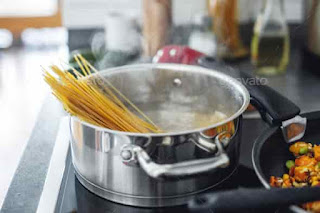 Boiling is a cooking method in which food should be in a pan of liquids, which must be kept boiling all the time, quite of bubbles should be seen on the surface. The boiling temperature is 100. c (212. F) 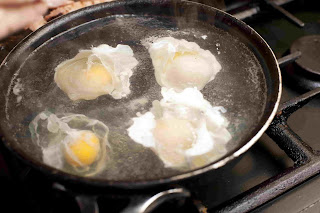 Poaching is a cooking method in which food is gently cooked in water that is just below boiling point (93 C-95.C). Vinegar and salt are used to liquids, it helps in quicker coagulation and prevents disintegration. 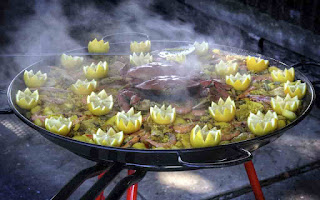 Here steaming is done when the food is placed in a closed pan, which is surrounded by plenty of steam from fast boiling water or in a steamer.

It is done on a covered plate over a saucepan of water. 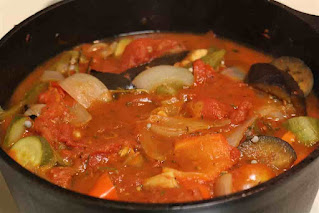 It is a time-consuming method of cooking, but the advantage is that the coarser, older, and cheaper types of poultry and meat are used as they are unsuitable for grilling and roasting.
Stewing is done in a small quantity of water, stock until the cut food items ate tender and both liquid and food are served together. It is done in a covered saucepan or casseroles. 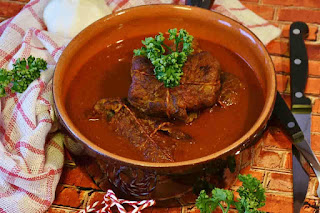 It is a combined method of roasting and stewing. The pan with a light fitting lid or casserole, it is done to prevent evaporation, so that the food re its juices together with the article added for flavoring. Bacon, ham, vegetables, and herbs are added.
The meat is first browned with a small amount of hot fat to seal the pores of the meat. It is then placed on a bed of root vegetables. Stock or demi-glace is added two-thirds of the meat.