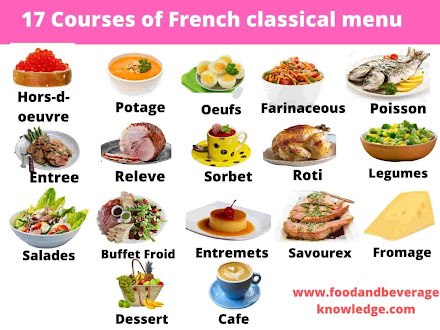 Here are the 13 courses of the French classical menu in sequence:

17 courses of the french classical menu sequence with examples

Here are the examples of 17 courses of the French classical menu in sequence with examples:

It is the first course of the french classical menu. This course consists of dainty and delicate dishes of tangy, salty nature, aimed at stimulating appetite. It is usually served from a rotating trolley or a tray a small amount of each variety is placed on the plate to make up a portion.
There are generally two types from the service point of view.

Classical hors-d-oeuvres are including the following:
A) Fruit juice/Soft drinks: In this course, various types of juices are served such as tomato juice apple juice, and grapefruit juice, served in a pony glass on an underplate over a dolly paper.
Cover: Pony glass, an under-liner plate with a teaspoon.
B) Grapefruit: Grapefruits are served in a grapefruit cup, placed on an underplate over a dolly paper with a grapefruit spoon. If the exact grapefruit cup is not available, it may be served on a half plate in some fancy shape napkin folding.
Cover: Grapefruit cup, underplate, and a grapefruit spoon or a teaspoon.
C) Melon:  There are various types of melon such as Cantaloupe, Honeydew, watermelon, charities. Served on half-plate on a bed of crusher ice fruit fork and knife. If the melon is overripe a dessert spoon or a teaspoon is also given.
Cover: Haif plate, fruit fork, and a fruit knife, dessert spoon, or teaspoon
D) Shellfish cocktail:  Any shellfish like shrimp, prawn, crab, and so on, are put in sauce, which is made with mayonnaise sauce, tomato ketchup, chilly sauce, Worcestershire sauce, tabasco sauce, and garnished with chopped parsley and a slice of egg. It is served in a cocktail glass on an underplate over a doily paper with a teaspoon.
Cover: Cocktail glass, underplate, and teaspoon.
E) Oyster: Oyster is a type of seafood, it is eaten row but not alive. They are freshly part of sea-shell. Oysters are served by six or dozen as a portion on a deep plate on a bed of crushed ice. The deep plate is placed on a large plate over dolly pepper. The oyster fork is placed on the right side of the cover.

Cover: Oyster fork, deep plate, large plate.
F) Caviar: It is the roe of sturgeon fish, caviar is served by weight. If the guest asked for certain caviar then the whole container is placed in front of the guest, after consuming the guest has given a charge on the basis of difference in the weight.
Some types of caviar:  Beluga, Kaluga, Sevgura, Oscietre, Botarga, Malossal.
Cover: Cold half-plate, caviar knife.

Potage or soup is the second course on the french classical menu. All classes of soups, such as clear, cream, puree, veloute, broth, bisque, and chowder come under the course.
In the absence of an appetizer on the menu, soup assumes the role of an appetizer. It stimulates the appetite for the heavier food
Soup is served in a soup bowl or soup plate on an underplate over a doily paper. soup is placed on the cover.
There are basically two types of soup thick soup and thin soup on the menu. There may be a choice between thin soup and thick soup, thin soup is written first on the menu

It is the third course on the french classical menu. All types of egg preparations (except plain boil egg)  are included in this course.
The egg may be given in place of fish course after appetizer and soup courses, It is advisable to include either egg or pasta in the table d’hote luncheon menu.
They are not included in set dinner menus as this makes one feel quite heavy during dinner 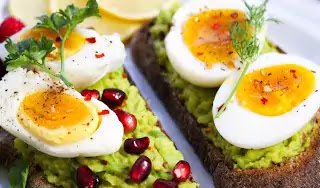 Examples of oeufs are

It is the fourth course of the french classical menu. This is Italy’s contribution to the courses of the menu. It includes different kinds of rice and pasta. made from an unleavened dough of wheat flour mixed with water or eggs.

Pasta dishes are spaghetti, lasagne, and gnocchi. There are more than 200 varieties of pasta. The ingredients, size, shape, and color determine the type of pasta. 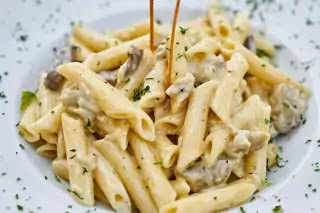 Entree is generally small well-garnished dishes, this course is said to be an entry to a meat course. which comes from the kitchen ready for service, they are always accompanied by a very rich gravy or sauce.
When a releve follows the entree then potatoes and vegetables are not served, if a releve does not follow the entree then potatoes and vegetables would be served with entree
An entree is the first meat course of the french classical menu. Entree may be served as the main course.

Examples of Entrees are

It is the seventh course or main course of the french classical menu. Releve is normally larger than entrees and takes the form of butchers’ joints, which have to be carved. These joints are either peeled or roasted. A sauce or roast gravy, potatoes, and green vegetables are always served with this course.
Joints of meat like lamb, mutton, beef, veal, and pork -cooked by various cooking methods, especially braised, roasted, and boiled are served in this course. It is the heaviest of all the 17 courses of the french classical menu
The main dish may consist of any of the following:
Service of releve: Releve is served on a large plate or full plate, large fork, and large knife arranged on the cover before guest hand. If rice is served as an accompaniment then an A.P spoon is also provided.

sorbets are water ice flavored with champagne or wine or liqueur and essences and are served in a tall glass with a teaspoon/sundae spoon. It is the rest course of the french classical menu.
It is intended to give rest during a long meal and to stimulate the appetite for the rest course, During this course, Russian cigars and cigarettes are passed around.

Examples of sorbets are

Cover: Water tumbler or tall glass, and underplate with a teaspoon. Cigar cutter and matchbox.

In this course, roasted poultry and game birds are included. If poultry or game birds are cooked by any other cooking method, then those dishes will not be considered as a roast course.
Salad is served separately on a half-moon plate with this course. Orange salad is offered with roast duck. This second heaviest course of the 17 courses of the french classical menu.
It is served on a large plate from a platter by service grear or served as a Pre-plated dish with proper accompaniment and garnish. A large fork and large knife are arranged on the cover.

All vegetable preparation comes under this course. Vegetables may be served as the main course on a shorter menu. Different types of vegetables such as mushrooms, artichokes, carrots, broccoli, and asparagus are served in this course.

These are vegetable dishes that can be served separately as an individual course with its own sauce like hollandaise sauce or beurre fondue, or can be served along with the entrée, relevé, or roast courses. 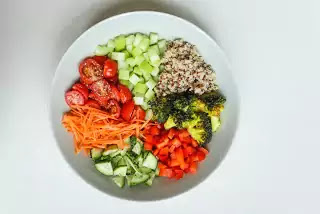 Various types of salads are served during this course, including plain or simple salad or compound salad. It can be cold dishes and green vegetables,

Some examples of salades 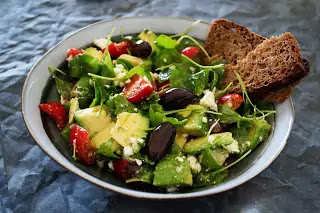 In this course variety of cold meat and fish is included, together with salad leaves and dressing.

The term Entremets means the entry of the sweet item. All kinds of sweet preparation, such as shuffles, custards, pudding, fool, bavarois, crepes, ice cream, pastries, whether cold or hot are included in this course.
They are generally two types

Different types of pudding, cake, and pastry, are served, it may be hot or cold. It is served either pre-plated or platter to plate with the help of a service spoon and service fork.
Cover: Half plate, sweet spoon, sweet fork.

Some examples of meat savory

Cheese is offered to the guest at the tablet on a cheese board along with a cheese tray and Cheese Knife.

Fromage is an alternative to the outdated savory course and may be served before or after the sweet course. It is usually served with butter, crackers, and occasionally.

All types of cheese may be offered together with appropriate accompaniments, the ideal cheese board will combine hard, semi-hard, soft or cream, blue and fresh cheese.

Some examples of cheese. 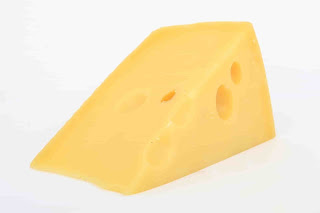 All forms of fruit and nuts may be served accompanied by castor sugar and salt.Prepared/pre-cut fruit should be considered as an example of a sweet course.
Fresh fruits that can be comfortably managed by the guest themselves at the table should be preferred on the menu.
Fruits are served in the fruit basket, and placed on the table at the time of this course. Cutlery provided as a fruit Knife and a fruit fork

Types of fruit served in the dessert course

Cover:  Half plate, fruit fork, fruit Knife. A nutcracker is provided if nuts are served.

Get the 17 Courses of French classical menu sequence PDF here